In theatre, a farce is defined as ‘a comedy that aims at entertaining the audience through situations that are highly exaggerated, extravagant, and thus improbable’. Jennifer Selway’s new play, Flat Out, currently at Highgate’s Upstairs at the Gatehouse, is the quintessential definition of a farce in the grand tradition of Michael Frayn, Alan Ayckbourn, Brian Rix and Ray Cooney.

‘Set in a crumbling block of South Kensington flats overrun by mice and scheming property developers’, then ‘throw into the mix a cross-dressing neighbour, an overzealous cleaner’ and a myriad of seemingly strangers, you have ‘set up a perfect scenario for a modern day tale of adultery and mistaken identities’. More exposition of the plot would only be a spoiler, and there are no spoilers here! 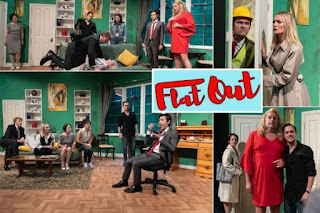 The success of the piece is very much dependant on the cohesion of the company, and director John Plews has put together an ensemble as tight as coiled spring. They are all characterised by their great physical humour, the use of deliberate absurdity and nonsense, and broadly stylised comic performances. Stuart Simons as cross-dressing neighbour Hugh is a complete hoot as he transitions between his two personas – an absolute tour de force performance, and at speed to boot! Jake Mitchell as millennial estate agent manqué and snooping busybody is brilliantly manic, and his physical humour and timing are fascinating to watch. Hollie Taylor as Marina the Cleaner is precisely what it says – and sounds - on the tin and is seemingly joyously naive throughout, especially in her use of the word happiness. But then again it is a disturbingly old joke!

Jennifer Selway’s Flat Out is a vintage comedy farce cleverly using buffoonery and horseplay, and includes some unsophisticated characterisations, all beautifully set amidst some ludicrously improbable situations. Add to the mix John Plews’ expertly observed and cleverly choreographed confusion and you are in for the epitome of farce and a masterclass in classic comedy.

Laugh out loud? Why not, nothing is stopping you! 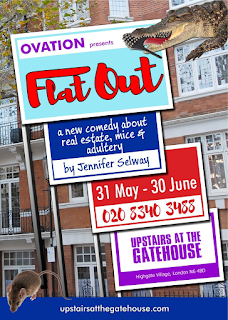