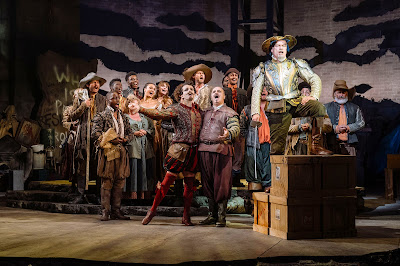 
It is just over 50 years since Man of La Mancha starring Keith Michell first opened at the Piccadilly Theatre. And it has taken that long to see this excellent musical back in the West End, but all good things are worth the wait. Broadway and Frasier star Kelsey Grammer as Don Quixote leads an eclectic yet brilliant cast with Nicholas Lyndhurst, Danielle de Niese, Peter Polycarpou and Eugene McCoy.


Inspired by Miguel de Cervantes and his 17th-century novel Don Quixote, Man of La Mancha tells the story of the slightly crazy knight Don Quixote and is a play within a play. It is performed by Cervantes and his fellow prisoners as he awaits a hearing with the Spanish Inquisition and is not a faithful interpretation of either Cervantes' life or Don Quixote.


Always chasing his impossible dream to peruse the beautiful princess Dulcinea, and tilt at a few windmills on the way, Don Quixote is determined to uphold all that is good and right. Even with the odds stacked against him, his courage abounds in his quest to reach the unreachable star.


The first thing that hits you about this grand production is the glorious overture performed by the 30-strong ENO orchestra. It is a joy to hear Mitch Leigh's score performed by such a magnificent orchestra under the direction of David White.


James Noone's almost dystopian set is dominated by one of the most towering staircases in the West End and provided Kelsey Grammer with his entrance to this world and the setting for the Don Quixote's fantasy storytelling. Grammer is every inch the Broadway musical star. Maybe not the best voice but that is irrelevant as he commands the enormous Coliseum stage with his crazed bumbling brilliance and sings well enough to wring every nuance, and the undoubted optimism and hope from the Act One finale and international hit, The Impossible Dream.


Danielle de Niese, described as opera's coolest soprano, brings great intensity and strength to her role as Dulcinea/Aldonza with her undoubted operatic credibility coupled with unquestionable musical theatre style. Nicholas Lynhurst as the Governor/Innkeeper is totally relaxed and charming in his betrayal and performance. Of particular joy is his rendition of Knight of the Woeful Countenance as he dubs Don Quixote, a knight. Peter Polycarpou is blissfully relaxed as Sancho Panza, especially in the song I Really Like Him and is the faultless foil to Grammer's Don Quixote.


Director Lonny Price has crafted a beautiful reinvention of this Broadway classic with impressive performances from a fascinatingly diverse, even eclectic, ensemble. Man of La Mancha is quite rightly a part of Broadway's heritage and golden times, and this wonderfully generous and charming production should not be missed.
Man of La Mancha runs until 8 June 2019 at the London Coliseum Theatre
More information and to book CLICK HERE
Danielle de Niese ENO James None Kelsey Grammer London Coliseum Lonny Price Man of la Mancha Mitch Leigh Nicholas Lyndhurst Peter Polycarpou The Impossible Dream The Review Chap