Elegies for Angels, Punks and Raging Queens - a decidedly ★★★★★ experience! 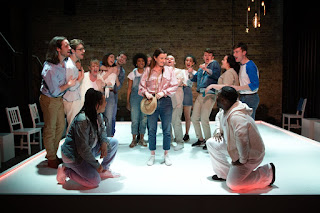 
Inspired by the Aids Memorial Quilt, Elegies for Angels, Punks and Raging Queens is a song cycle by Janet Hood with lyrics and additional text by Bill Russell, and features a patchwork of monologues and songs from the viewpoint of a group of disparate characters, all affected by HIV/AIDS and all of whom have died from AIDS. Using director Bryan Hodgson’s own words to describe this production, ‘it lets us celebrate, mourn, let go, cry and smile all at the same time’. And the result achieved by this most stunning ensemble is breathtakingly original and wonderfully heartfelt. 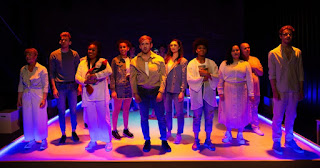 With a magnificent, fascinatingly diverse sixteen-strong ensemble telling some 30-odd stories, Hodgson has crafted a seamless stream of consciousness that explores the multi-levelled anecdotes of the people caught up in this harrowing epidemic: their vim, vigour, stoicism, despair, humour are all emotions explored through the bleakness of their situation yet with human resolve coming through even in death. 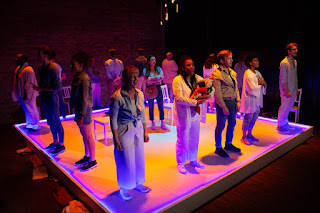 Justin Williams simple set uses the quilt theme as its ever-evolving focus as each story is told and Henry Brennan’s musical direction and sound design is faultless, and Pippa Mason’s cello accompaniment was the perfect addition.


Rhys Taylor’s diva Bette Davis/Carol Channing was brilliantly funny and I Don’t Do That Anymore and Spend It While You Can were both great comical yet poignant musical theatre numbers, whilst Ailsa Davidson’s My Brother Lived in San Francisco packed an enormous emotional punch. But without doubt, the entire ensemble – Fraser Leigh Green, Michiel Janssens, Marcus Ayton, Calum Gulvin, Aidan Harkins, Chris Cahill, Althea Burey, Jackie Pulford, Jade Marvin, Charlie McCullagh, Ailsa Davidson, Jade Chaston, Rhys Taylor, Paige Fenlon, Kristine Kruse and Matthew Grove – are the strength and beating heart of the entire piece and should be greatly admired. The quality of the voices from this tremendous ensemble is exemplary.


Once again, Sasha Regan has produced – and designed the costumes - an exciting and still relevant piece of theatre with Bryan Hodgson back at the directorial helm in such an inventive way. Decidedly a five-star experience!