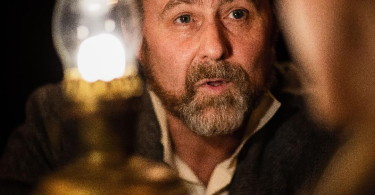 ☆★★★★ Uncle Vanya
Tales Retold production of Uncle Vanya, currently playing at the Hope Theatre, has cleverly reduced Chekov’s traditional four-act play into an 85-minute compact adaptation. Director James Stone in his notes feels that writer Brendan Murray skilfully created ‘a richly distilled, almost immersive experience of this classic drama.’  Sadly there is no credit for set design for this detailed and cleverly observed design, but the atmosphere is beautifully augmented by a superb soundscape by Jim Armstrong and excellent lighting by Chris McDonnell.


Unashamedly quoting the Hope Theatre’s synopsis, ‘Uncle Vanya’s learned brother-in-law returns to the family estate with his new young wife, Yelena. This is enough to break the fragile surface tension, the thin layer of delusion, which thus far has contained the more toxic realities of family life. Drink flows, and soon father, daughter, uncle and all become embroiled in a passionate crescendo of domestic unrest – opening wounds, breaking hearts and putting the future of the whole estate in peril.’


And without a shadow of a doubt, this smart, streamlined retelling delivers. The tight ensemble of six brings paced yet beautifully nuanced performances under James Stones smart, perceptive and shrewd direction. Adrian Wheeler as Vanya is conflicted however provides humour in an empathetic and robust performance. Cassandra Hodges as Sonya is distinguished and genuinely noble, albeit racked with emotional pain and turmoil. Esme Mahoney as Yelena is like fine porcelain and portrays strength and beauty in its purest form.


I overheard someone in the bar before the performance saying this was Chekov Light, and how was it possible to portray Uncle Vanya in a mere 85 minutes? The answer is easy: you can and, more importantly, with great style. Clever, paced writing, sharp direction coupled with strong, moving and emotional performances too from this exquisite ensemble. Another must-see at the Hope Theatre.
Photography by Cameron Harle
Uncle Vanya is playing at The Hope Theatre from 22 April until 11 May 2019
Adrian Wheeler Brendan Murray DK Ugonna Esme Mahoney Gilly Daniels James Stone The Hope Theatre The Review Chap Uncle Vanya