Thrill Me: The Leopold and Loeb Story - a ★★★★★ superior obsession! 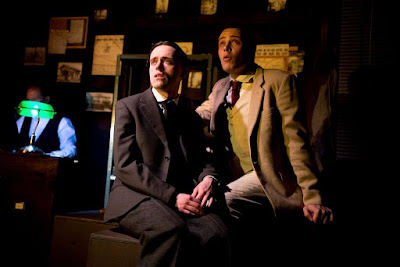 
A musical based on a pair of murderers set in Chicago seems an unusual, even unlikely, premise but we have encountered the fabulous, yet fictional, Velma Kelly and Roxie Hart in the past – all murder and jazz hands! Real-life murderers Nathan Leopold and Richard Loeb, the subject for Thrill Me currently at the Hope Theatre, are an entirely different proposition. No froth here just menacing fear.


Set in Chicago in 1924, Richard Loeb is obsessed with crime. Nathan Leopold is obsessed with Richard. They sign a contract in blood to satisfy each other’s needs and embark on an intense sexual relationship powered by the thrill of committing a crime. But Richard soon tires of arson, theft and petty vandalism. Under the delusion that he is an Ubermensch - a concept in the philosophy of Friedrich Nietzsche - and above morality and law, he ropes Nathan into committing the perfect murder for the ultimate turn-on. They become the Thrill Killers. 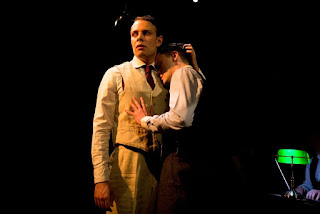 With the very apt production strapline, Relationships Can Be Murder!, Matthew Parker’s stunning new production of Stephen Dolginoff’s Thrill Me is beautifully crafted: taut, sinister and ultimately disturbing – a masterclass in delusion and obsession. From the minute, you enter Rachael Ryan’s fastidiously observed set with Simon Arrowsmith’s subtly enveloping soundscape, the scene is set for this nugget of passion and fixation. 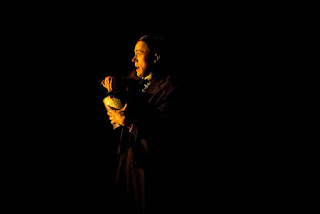 Bart Lambert as Nathan Leopold and Jack Reitman as Richard Loeb are fascinating to watch as their unhealthy relationship slowly unravels. Lambert is captivating as his obsession with Loeb unfolds; his need is visible in the sinewy infatuation evident in every muscle of his body. Reitman worryingly conveys the sheer manipulative menace of his unhealthy superior obsession and penchant for both physical and mental cruelty - two genuinely beautifully mature performances. And, lest we forget, Thrill Me is a musical and, under the direction of Tim Shaw, the score and the vocal performances are cleverly, almost seamlessly, integrated into the dark narrative.


Matthew Parker’s production of Thrill Me is decidedly a glittering gem in that black box known as The Hope Theatre. Don’t miss it!