Clearly, for aficionados of the cult classic musical Hair, it’s a no brainer. And seemingly by the reaction of the audience at Wimbledon, this 50th Anniversary production hits a high spot without the aid of any artificial stimulants.


Produced by the northern powerhouse that is Hope Mill – William Whelton and Joseph Houston - and Aria – Katy Lipson, this production which was previously seen in Manchester and London’s Vaults is prepped and ready for a nationwide regional tour in some seriously large theatres, starting in the New Wimbledon which seats over 1,600 on a good day!


Set in the 1960s at the time of the Vietnam War, Hair was one of the first musicals to deal with sex, drugs and nudity on the West End stage. In fact, it could not be produced until theatre censorship had been abolished – how times have changed!


Ultimately running for nearly 2,000 performances in London, Hair tells the story of a group of politically active  hippies living in a commune in New York and defying the draft into the Vietnam war, Claude, Berger, Sheila, Hudd, Woof and their friends struggle to balance their rebellion against war and the conservatism of society and family. Ultimately Claude must decide whether to avoid the draft or give into pressures, both familial and societal and serve in Vietnam risking his pacifist principles and ultimately his life.


With an incredible score featuring some of the best anthems of the 60s including Let The Sun Shine In, Aquarius, I Got Life, and an overabundance of other greats, Jonathan O’Boyle’s production is ardently led by Jake Quickenden as Berger. Making his musical theatre debut, he positively bursts with energy, enthusiasm and brio throughout the piece as do in fact the entire company. Daisy Wood-Davis as Sheila and Marcus Collins as Hud sing with exquisite vibrancy and elicit heartfelt emotion from their performances. Bradley Judge as Woof has the most life-affirming presence on stage and is always a joy to watch. But ultimately Hair’s strength lies in Ragni and Rado’s inventive score and the sheer elation in the voices of this exceptional ensemble.


Director Jonathan O’Boyle and choreographer William Whelton have crafted a dazzling, brave, effervescent manifestation of this life-changing era, and are to be much admired in achieving a bright, bold, coherent reimagining of this ground-breaking period piece of theatrical history. May the sun shine in again across the country!

Click on link below for tour dates and to book tickets
https://www.hair50.com/tickets-tour 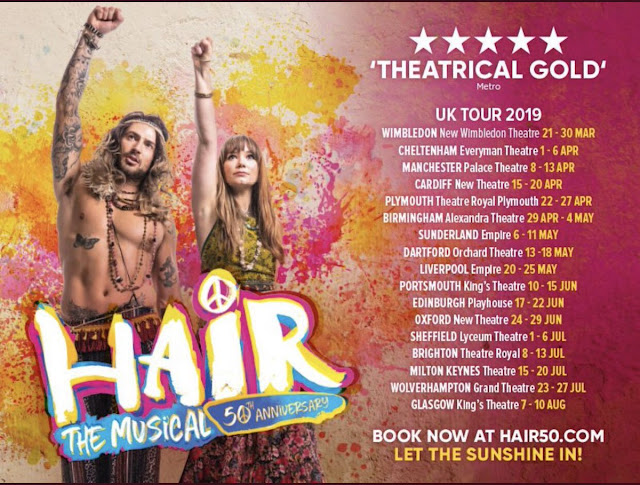