When considering the provenance of a musical, Club Tropicana’s roots seem crystal clear: Hi De Hi, Benidorm, Mama Mia with a strong familial Carry On resemblance. That’s not a bad thing; in fact, there are many superlatives that should be heaped on Club Tropicana - the first being campest! This must be the campest, most fun-filled, joyful show in town at the moment.


It is also the epitome of a classic jukebox musical, not the most difficult or challenging plot but jam-packed with hits from the ‘80s.  And boy do they keep coming – Girls Just Wanna Have Fun, Physical, I Could Be So Good For You, Making My Mind Up, Don’t Leave Me This Way to name just a few from the twenty-five plus songbook.


As for the plot, quoting the official source, ‘when our budding bride and groom get cold feet, they decide to jet off to sunnier climes and feel the heat– but little do they know they’ve checked into the same hotel...


‘The sizzling summer season at the Club Tropicana sees drinks flowing and tans glowing. Will our young lovers decide to go through with the wedding? Will the hotel inspectors finally get their way and close the resort, or will the staff save the day?’ There’s lots of plot highpoints along the way but rest-assured – no spoilers here – the denouement was happy!


Joe McElderry leads a wonderfully enthusiastic and talented ensemble as Garry, head of entertainment at the Club Tropicana who acts as the campest of hosts, regularly breaking the fourth wall but also cleverly holding the action together throughout the show – a genuine tour de force performance with some excellent vocals too!


Kate Robbins as Consuela, the hotel’s omnipresent cleaner, is a complete hoot and doesn’t hesitate to give us her best Cilla, Dolly, Tina and even Margaret Thatcher impersonations – pure hysterical delight and nonsense!


There are excellent performances too from Amelle Barrabah and Neil McDermott as the struggling managers, Serena and Robert, of the hotel, with a special mention to Kane Verrall as Blaine who sings and dances tirelessly and is the perfect foil to McElderry’s Garry.


The success of Club Tropicana comes from the tight, intuitive direction of Samuel Holmes and Nick Winston, who also choreographs a storm of ’80’s dazzling moves. But ultimately this is one dedicated company that maintains the raucous, infectious joy and happiness inherent in this fun-filled, superlative nostalgia-fest of show. 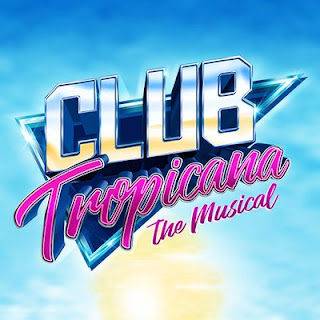