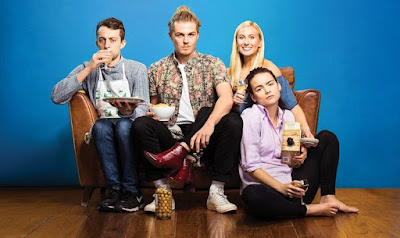 
Katherine Thomas' writing debut, Never Trust A Man Bun, currently at the Stockwell Playhouse is a bright confection of tonsorial elegance – witty, sharp, cutting, beautifully observed with some serious dry humour, but above all, funny.


Quoting the production synopsis, ‘24-year-old Lucy’s idea of a good night is binge-watching Goggle Box, eating leftover bolognaise and mocking the contestants on talent shows with her flatmate, Gus. So, when Lucy gets back from work one night, only to find that Gus has gotten back together with his ditsy ex-girlfriend Rachael and that they have decided to hold a double date that night, Lucy is far from pleased. However, what she doesn’t expect is her hot date is coming in with a game plan, one which surely cannot end well.’ The hot date, together with man bun, arrives in the form of Caps who is only ever introduced by his nickname, which is never explained. Interestingly he comes with history with Rachael and unashamedly sets the seeds of doubt and cleverly manipulates the entire jolly soirée.


Director Scott Le Crass has crafted a tight, high-velocity production which capitalises expertly on Katherine Thomas’ smart script, where she appears as the vaguely hard-bitten flatmate, Lucy – clever, fast-tongue and relentlessly cruel. Appearing as the gloriously stupid Rachael, Natasha Grace Hutt has crafted a wonderful character who insists she is not stupid, yet reinforces the reality with her sublime comic performance. Calum Robshaw as Gus Is perfectly precise in his excellent needy portrayal of Lucy’s long-suffering flatmate, capturing emotional blindness and enthusiastic stupidity in equal measure. Jack Forsyth Noble as the enigmatic Caps wears his man bun with a particular, mysterious, manipulative swagger.


Never Trust A Man Bun works because of the tight, punchy dialogue, cleverly smattered with sharp, cutting, funny one-liners and some gorgeous laugh-out-loud awkwardness. Coupled with the undoubted strength of the fast-paced performances of this young and unquestionably gifted ensemble, this is an intelligent piece of new writing and decidedly worth a look.