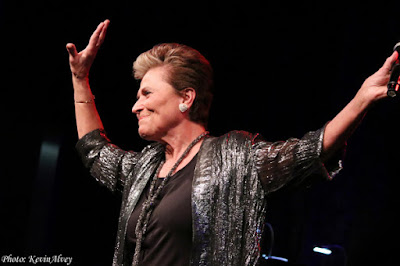 
Lorna Dallas is the epitome of an authentic Broadway and West End star. As she shimmered into the Art Deco-inspired elegance of the Crazy Coqs at Zedel, she was at home. With an audience clearly made up of dedicated fans, a few Dallas virgins, and, in the front row, Christopher Biggins, Ms Dallas was away taking us on a musical romp through aspects of her fulsome and amazingly successful career.


Stages is effectively part two of her 2017 show, Home Again, which was her return to the stage after a 20-year hiatus. The stages in the title refer to those theatres and nightclubs where she performed, having started out in a small town in Southern Illinois and ultimately reaching the heights of Broadway and the West End. Devised by her two long-time collaborators, musical director Christopher Denny and director Barry Kleinbort, the show is classic cabaret performance – great stories, name drops, and a truly stunning voice. And, without doubt, Lorna Dallas is the quintessential exemplar of the genre.


With a 20-strong playlist, Dallas took us through some classic Irving Berlin with There No Business Like Showbusiness, Sondheim, Kander and Ebb, Jerome Kern and Cole Porter. She also gossiped about working with lyricist Sammy Cahn in London who dubbed her Priscilla Perfect before giving a superb rendition of Teach Me Tonight. She also sang Stranger in Paradise in three styles, recounting how she was performing in Kismet at the Shaftesbury by night, then dashing off to the Savoy to do late-night cabaret, while simultaneously for two weeks flying to Germany by day to record a TV special. And yes, she sang it in German too!


There was also a great story about turning down Anna in the King and I on Broadway with Yul Brenner – love got in the way, and she happily married an Englishman instead! And of course, there was the story about the late Queen Mother, but enough. 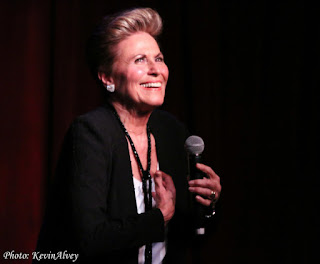 The stories all make up the perfect cabaret performance, but above all Ms Dallas has the most exquisite soprano voice which she uses with dexterous fluidity through this captivating, magical and heart-warming performance. She is the consummate, totally-engaging professional and it was a joy and privilege to be present for the ultimate master class in the art of stylish cabaret. A must-see anytime, especially when next in London!
Photographs: Kevin Alvey
lornadallas.com
Lorna Dallas: Stages at Crazy Coqs Live at Zedel 20 Sherwood Street London W1F 7ED
Musical Director: Chris Denny
Director: Barry Kleinbort
Press: Kevin Wilson
Barry Kleinbort Brasserie Zedel Chris Denny Crazy Coqs Kevin Alvey Kevin Wilson Lorna Dallas Stages The Review Chap