The Ruffian On the Stair - a ★★★★★ dysfunctional drama 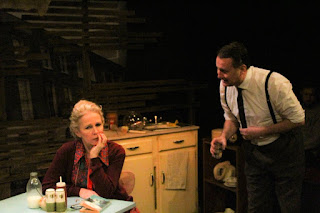 
Joe Orton was paid £65 by the BBC for The Ruffian on the Stair, a 45-minute radio play broadcast in 1964, which was a re-write of 'The Boy Hairdresser' - a novel written with Orton’s lover Kenneth Halliwell between 1959 and 1960. With themes of incest, homosexuality and murder, these were controversial topics for a conservative ‘60s audience.


It is an unsympathetic yet comedic one-act portrayal of working-class London, as played out by Mike (Gary Webster) and Joyce (Lucy Benjamin), a couple living in a tiny flat in Islington, and Wilson (Adam Buchanan), a mysterious young man who toys with their lives. Mike is an ex-boxer living on the ‘assistance’ that makes extra cash by running people down for money, and Joyce is an ex-prostitute.


Quoting The Hope’s synopsis, ‘when a young man says he’s looking for a room, he has so much more on his mind. For Joyce hiding away from the world, does he bring release or a different kind of ending? Left alone by her protector Mike, she has to deal with the intrusion on her own terms with unexpected results.’ With no spoilers here, Orton decidedly does not disappoint.


Arriving at the theatre's first-floor space, you could almost be in Joyce’s real first-floor flat, such is the seedy brilliance of Rachael Ryan’s design, which is packed with so many detailed period-nuanced touches. It felt so truly immersive that I almost put my drink on the coffee table in front of me.


Paul Clayton’s direction is the ultimate in relaxed reality where the audience are serious voyeurs - if there was a net curtain, we were definitely the twitchers behind it!


Lucy Benjamin’s performance is superbly manic and shrill, yet her controlled, experienced focus in her tantalisingly hysterical state is fascinating to watch. Gary Webster is laid back and controlled but with the ultimate air of sinister menace and underlying violence – they are a dysfunctional duo and a joy to watch! Adam Buchanan, the ruffian of the piece, was maybe none too rough, but was nevertheless ominous, terrorising and intimidating, and someone not to be met on the stair!.


The Hope Theatre’s production of Joe Orton’s Ruffian on the Stair is stylishly seedy, dysfunctional drama at its very best!