The Pirates of Penzance - a ★★★★★ quintessentially great British joy. 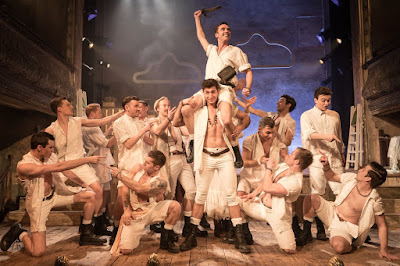 
Sasha Regan seemingly has the perfect theatrical life - producer, director, theatre proprietor, and, according to the programme, is married to her own Pirate King! She also has a new manifestation of her beautiful, all-male production of Gilbert and Sullivan’s comic opera, The Pirates of Penzance playing at the impressive Wilton’s Music Hall.


Not an aficionado of opera, comic or otherwise, although I vaguely remember seeing a production of Pirates with Pamela Stephenson, Tim Curry, Paul Nicholas and even Bonnie Langford, it was with some uneasiness that I eventually found Wilton’s. 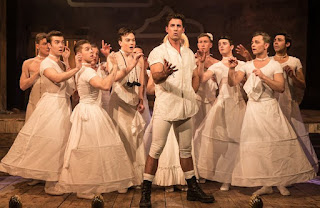 My first impression of this production was that it was camp. As I wrote the word, I checked the definition, and it said, ‘something that provides sophisticated, knowing amusement… or is teasingly ingenious and sentimental.’ Sasha Regan’s Pirates of Penzance is all of these things and joyously much, much more!


With a fantastically strong and undoubtedly versatile ensemble of eighteen stout-hearted men, a fantastic score that is saturated with melodies infused into your psyche by some form of musical osmosis - Poor Wondering One, Modern Major General, With Cat-Like Tread and many more - what’s not to love?


Tom Senior as Frederic is the epitome of a leading man - tough, tender, credible and completely dependable - and, with exceptionally talented and vocally flexible Sam Kipling as Edith sing up a complete storm.   Alan Richardson as Ruth is eye-flutteringly comedic to watch, and David McKechnie is the embodiment of a modern Major General and deals with the impending marriage of his multitude of daughters with serious panache. 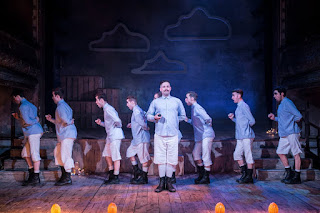 Above all, the Pirates’ ensemble is seriously at one throughout the performance, and the detail and nuance that director, Sasha Regan, has imbued into the production are fascinating to watch, while Richard Baker's musical direction and Lizzi Gee’s choreography simple adds further layers to this multi-levelled confection.


Apologies for no real plot synopsis, suffice to say it is about pirates and is quintessentially British. Simply enjoy Sasha Regan’s insight into Gilbert and Sullivan’s timeless melodies, sense of humour, and all rooted in this delightfully eccentric and charming world.
Photography by Scott Rylander
Pirates of Penzance runs at Wilton's Music Hall until 16 March 2019
Book Tickets https://www.wiltons.org.uk/whatson/511-the-pirates-of-penzance