An Enemy of the People - a ★★★★ essential experience 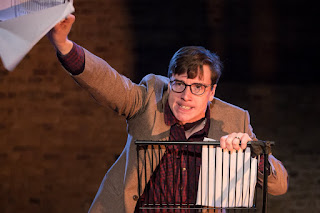 
Initially written by Henrik Ibsen in 1882 and then adapted by the American playwright in the 1950s, Miller’s An Enemy of the People hasn’t been staged professionally in London for nearly 30 years.  Miller brings razor-sharp psychological precision to Ibsen’s timely thriller about a rebel scientist fighting to expose a corrupt regime and press.


Set now in Kersten Spring in small town America, An Enemy of the People tells the story of Doctor Stockman who wants to save his town by stopping the opening of the new spring, having found the water to be contaminated. Simple premise, until you are threatening the economic stability and growth of the town and your sister is Mayor Stockmann, who will do anything, in concert with the local newspaper and dignitaries, to stop the spread of this bad news.


Democracy, corruption, family, friendship and loyalty are all in the mix in Phil Willmott’s stylish, elegant, challenging and clever production. David Mildon, conflicted, tortured but ultimately honourable as Dr Stockmann and Mary Stewart, single-minded, determined but ultimately corrupt as Mayor Stockmann are fascinating to watch as their characters develop to the critical denouement, where both characters brilliantly portray a form of questionable madness. However, above all, An Enemy of the People benefits from a radiant ensemble, with standout performances from Jed Shardlow as Hovstad as the conflicted journalist and Emily Byrt as Dr Stockmann’s wife, Catherine.


Mention must also be given to Nicola Chang’s smart, appropriate and seriously atmospheric sound design and Justin Williams and Jonny Rust’s skeletal set beautifully conveys the beginning of the Spring development, while easily transforming into the setting for the menacing public meeting with the audience cleverly making up the baying crowd.


Seemingly London will be engrossed with work by Arthur Miller with productions opening at the Old Vic, Young Vic and Wyndham's Theatre over the next few months. However, time waits for no man, and a visit to Phil Willmott’s stylishly compelling production is a must.

CAN-CAN! – a new musical of Orpheus in the Paris underworld
Music by Jacques Offenbach and his contemporaries
Book by Sir Arthur Wing Pinero
Freely adapted, with lyrics by Phil Willmott
Choreography by Adam Haigh


A fun and frivolous new musical adapted from Offenbach’s operetta ‘Orpheus in the Underworld’ featuring the larger than life performers of the Moulin Rouge who scandalised Paris in the 1800s. The newly arranged score features a treasure trove of gorgeous melodies by Offenbach, Lehár and others, culminating in the famous Can-Can itself.
Evening performances: Tuesday – Saturday 7.30pm


A bold and audacious new staging of Shakespeare’s classic thriller in which the General Othello and his new wife, Desdemona are psychologically tortured and destroyed by a jealous, subordinate, Iago.