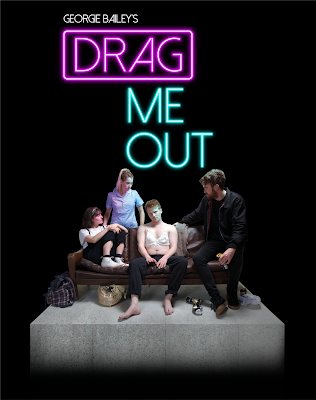 
'They say you lose eleven minutes of your life when you smoke a ciggie. I lost a whole lot more just trying to light the damn thing...'


Georgie Bailey’s new play, Drag Me Out, produced by Budding Rose Productions, currently at the Hen and Chickens Theatre, is in vast contrast to his last, more madcap offering, Euan.


Drag Me Out explores the effects of Post Traumatic Stress Disorder (PTSD) on Soho drag queen, Xannie, who ‘hasn’t left the four walls of his flat in six months. Not since the night, he stepped into the neon pits of Soho, where his voice was dragged down the back alleys, never to be heard again. Not by his sister or his friends. No one. But Moe is coming. Moe will listen. Moe’s about to change a lot of things.’


There is a lot more to discover about the reason for Xan’s condition as the narrative unfolds, but there will be no spoilers here. Suffice to say we experience a lot of the pain, confusion, anger and anguish associated with his PTSD as his erratic and strange behaviour impacts on those closest to him. His obsession with Noel Edmonds’ Deal or No Deal, Victor/Victoria and Dickinson’s Real Deal all add to the desperation inherent in his condition but also give some moments of humour in his need to cope on a day to day basis.

Jack Sunderland’s portrayal of Xan is fascinating, intimidating and yet deeply sensitive as he swings from an overpowering dominant drag queen, entirely in his audience’s face, to the confused, introverted damaged soul unable to leave his flat. This is a totally authentic and thoroughly empowered performance.  Sunderland is supported by an equally strong ensemble with Alice Ivor as Xan’s sister, Chantelle Grace as Cas, friend, and Dylan McCormack as the enigmatic and menacing, Moe.


Budding Rose Productions should be applauded for their quest to develop new writing as Drag Me Out is an exciting, challenging, smart and taut new piece by Georgie Bailey. It is performed with depth and sensitivity by a brilliant young ensemble and should not be missed - simply drag yourself out to the Hen and Chickens Theatre now!