Having established that Boujie was not the famous nightclub down the road in South Kensington previously favoured by royals, footballers and celebs, The Online Slang Dictionary thankfully came to my rescue with this definition of boujie - (adjective) acting above one’s station.  This was a perfect summation of the three interpretations offered in the programme for Unshaded Arts’ premiere production of Hassan Govia’s play, Boujie, currently at the Drayton Arms Theatre.

Unashamedly quoting from the play’s synopsis, ‘entertainment blogger Devin hosts a housewarming at his new, luxury apartment. But when the evening is derailed by the intrusion of some uninvited guests, he is forced to defend himself from accusations suggesting that his newfound prosperity has made him too ‘boujie’.


Ultimately the force of the plot revolves around money. Devin, played by writer Hassan Govia, has made a lot of cash from his blog, in fact, a seven-figure sum – could this be based on Jamal Edwards?  And with money comes fraught relationships, jealousy, loyalty, spitefulness, confusion and the perfect set up for some comedy within the drama.


Maybe slightly overlong at 90 minutes for a one-act play and in need of some judicious editing, Boujie nevertheless had a definite pace and some great performances from the tight ensemble. Hassan Govia had a relaxed lugubriousness as Devin - apparently as the writer intended - who was under pressure from friends and family throughout with his new enhanced, Veuve-driven, unexplained lifestyle and wealth. Maria Yarjah as friend Jocelyn and Cristal Cole as Devin’s sister, Giselle, were convincingly real throughout, adding great pace, verve and credibility to the parts. Both had great attack and were the perfect personification of the family and friend dynamic in this confused scenario. Freddy Gaffney as Giles, Devin’s neighbour, is joyously annoying as the quintessential nosey neighbour. Obsessed that Devin’s unexplained cash is from drug dealing, his performance is full of farcical qualities and is irritatingly funny, made even more so when it turns out that....sorry no spoilers here!


Director Zoe Morris and Unshaded Arts have produced an intriguing, sharp, production that is charmingly captivating and enhanced by the strength of the compelling performances of a talented young, diverse ensemble - more, please. 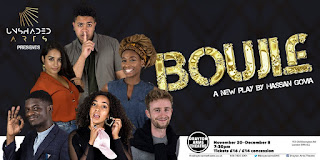 Boujie is playing at the Drayton Arms Theatre from 20 November until 8 December
Buy tickets at thedraytonarmstheatre.co.uk

Check out Tom Hartwell's London Fringe Podcast interview with the cast and creatives of Boujie
at https://soundcloud.com/user-762290068/s2-ep31-boujie-cast-creatives