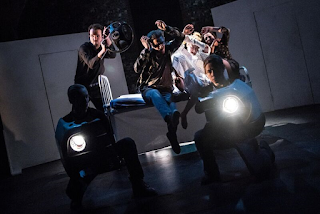 
Chalk Line Theatre’s production of Testament arrives at London’s Hope Theatre with an array of well-deserved plaudits from a triumphant run at this year’s Edinburgh Fringe. Written by Sam Edmunds who is also credited as producer, set and lighting designer, and joint director with William Harrison, who also created a stunning soundscape for the production.


As to storyline, thankfully, the programme has a ‘blurb’ which is unashamedly copied here, ‘In the beginning, God created the heavens and earth and... Max! Max is in a car crash with his brother and his girlfriend Tess, who dies in the accident. Following the loss of his girlfriend, he tries to commit suicide and fails, but when he wakes up, he believes she is still alive, leaving him left questioning what happened to Tess. Answers appear as apparitions of modernised biblical characters, aiding Max in his discovery or tempting him away. His only hope of recovery lies in the hands of his brother Chris’. 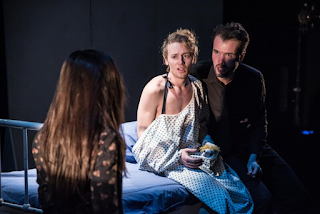 Chalk Line Theatre is a company formed of recent graduates from East 15 Acting School, and there are without a doubt some intense and very compelling performances from this young and vital group of theatre-makers. This is a tight ensemble who all give fascinating and exhilarating performances throughout while dealing with loss, grief and associated mental health issues, while also enjoying some very comical moments.


Nick Young as Max gives a mesmerising performance and is both intimidating and gentle as he deals with the loss of his girlfriend, Tess, skilfully played by Hannah Benson, and his associated brain damage. In contrast, his scene with his brother, Chris played by William Shackleton, as they prepared to go clubbing is boundless joy, especially the encounter with Lucifer (Daniel Leadbitter).


Creatives, Sam Edmunds and William Harrison have created a visually smart and concise set with a seriously compelling soundscape and lighting design that enhances their creative, physical direction which at times is brilliantly balletic in the context of the piece. 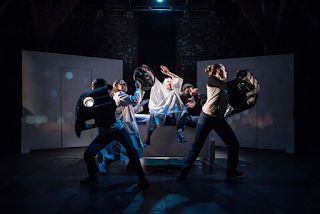 Testament is a bold, coherent piece of new writing, with an original new company who are seriously on top of their game. This is car crash theatre at its very best!
Testament plays at the Hope Theatre on 28 and 29 October at 7.45pm.
Tickets available at thehopetheatre.com and 0333 666 3366