The Lesson - A masterclass in absurdity 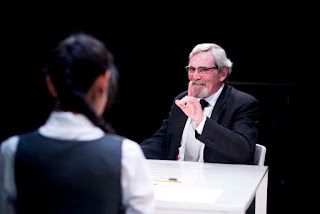 
The Hope Theatre in Islington uses the strapline, ‘the little theatre with big ideas’, and over my last few visits, I have seen some excellent new work, particularly Adam and Eve and Fat Jewels. Eugene Ionesco’s The Lesson is The Hope’s seventh in-house production under award-winning Artistic Director, Matthew Parker who is also directing. It was fascinating to overhear his conversation with an audience member before the performance of his clear passion for the work of Ionesco, which was also reiterated in his director’s note in the programme.


The Lesson is a tightly-written three-hander featuring the Professor (Roger Alborough), the Pupil (Sheetal Kapoor) and the Maid (Joan Potter). It tells the story of ‘an enthusiastic young student who arrives at The Professor’s house for her lesson, she is wide-eyed and ready to learn. But no amount of studying can prepare her for the odyssey that lies ahead’. As the absurd and nonsensical lesson progresses, the Professor grows more and more angry with what he perceives as the Pupil's stupidity, and the Pupil becomes quieter and meeker. Even her health begins to degenerate, and what starts as a toothache develops into her entire body aching. To go further would be a massive spoiler to the outcome of this preeminent example of the Theatre of the Absurd.


On arriving into the auditorium, you are faced with the Maid frantically cleaning the central white set comprising of a table, chairs and white tiled floor, with the hint of disinfectant hanging in the air. The walls that surround the space are painted in blackboard paint and are heavily chalked with words, diagrams and drawings. Rachel Ryan’s set design is calmly manic and adds to the pertinence of the piece with it subtle, yet ultimately overpowering relevance. This is augmented by the brilliant soundscape by Simon Arrowsmith which heightens the tension all the way through.


Roger Alborough’s portrayal of the Professor grows throughout, and his depiction of the absurdity of the complex dialogue is masterful yet at the same time menacingly macabre. His execution of Ionesco’s illogical explanation of philology is joyously deranged. Sheetal Kapoor as the Pupil is beautifully concise and succinct in her portrayal and is fascinating to watch as she transforms from a precise student to a terrified, confused victim in a horrible, cruel repetitive drama. Joan Potter as the Maid reinforces the absurdity of the situation with her regular warnings of events to come and makes palpable the sense of foreboding and inevitability inherent in the piece. 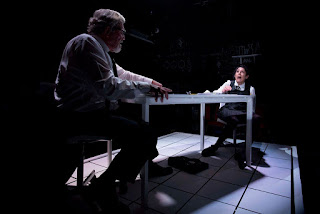 Matthew Parker’s direction exemplifies his deep passion for Ionesco’s writing, and the control and motivation that he elicits from the performances are superb. Seemingly there is a deep trust between the actors and, while space is tight, this only goes to add to the menace and craziness inherent in the writing.


The Lesson is ultimately the embodiment of the absurd and a testament to a play that was written over 60 years ago and still strongly resonates today - lesson learned.
Photos courtesy lhphotoshots
The Lesson plays at The Hope Theatre until 13 October
For tickets, CLICK HERE