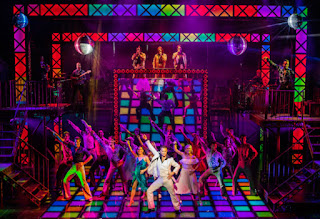 
The new, nationwide 21-date tour of iconic musical Saturday Night Fever which opened last week at the New Wimbledon Theatre is billed as a ‘big new music and dance spectacular’ and promises to pay homage to the movie, but with ‘more drama, more music and hot new choreography’.


Featuring the Bee Gees greatest hits Stayin’ Alive, How Deep Is Your Love, Night Fever, Tragedy, More Than a Woman and many more, Saturday Night Fever is set in Brooklyn, New York in 1976, and tells the story of Tony Manero, a young man with a dead-end job and an extraordinary ability to dance, but ultimately has only one ambition in life - to become the disco king. When he meets Stephanie, who also dreams of a world beyond Brooklyn, and they decide to train together for a dance competition, their lives begin to change forever. 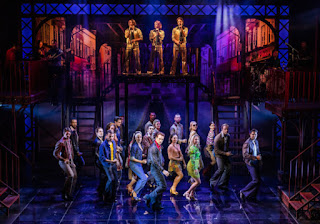 Bill Kenwright, both producer and director, has decidedly got a lot of bang for his bucks with this production, which features an ensemble of 24 that includes three on-stage Bee Gees, who magnificently interpret the iconic soundtrack to an era. And seemingly the hedonistic joys of Studio 54 were just a stone’s throw away. 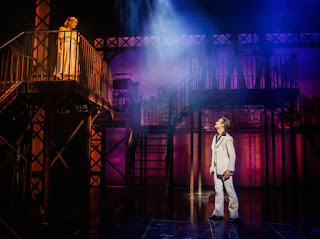 The set was a maze of interlinking staircases which defined the Brooklyn townscape and ultimately transformed into a glittery heaven with a retro-disco, coloured illuminated dance floor. Bill Deamer’s choreography was, as always, exquisitely precise and a perfect reinterpretation of the moves that defined and enthralled a generation.


Taking on John Travolta’s enormous shoes was Casualty star and Mathew Bourne alumnus, Richard Winsor, who performed and worked tirelessly throughout. My feeling was that, while you go to see the star, less would have been more. He was effectively on-stage throughout, whether leading the iconic disco-inspired dance routines, endlessly running up and down the staircases between scenes, changing into his white suit; he barely got a chance to take a breath. And while Winsor is, without doubt, a seasoned, skilled and highly-talented ballet dancer too, the newly inserted ballet sequence was a step too far and weirdly incongruous in the context of the piece. 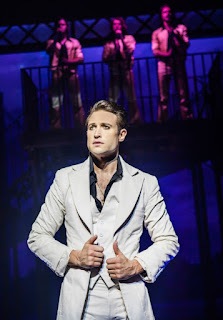 Last week was Saturday Night Fever’s first stop on a long tour, and I am sure that once the company gets into the run, this will be a brilliant reinterpretation of the iconic source material. As it stands, it is a good night out with great music, fabulous dancing and some strong performances from a young, clearly talented ensemble. Time alone will tell, but I feel convinced that Bill Kenwright’s new production of Saturday Night Fever will soon be delivering boogie shoes in the midst of a disco inferno and guaranteeing the audience a severe case of night fever! 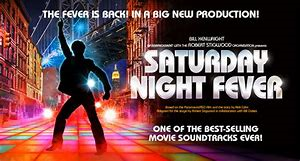