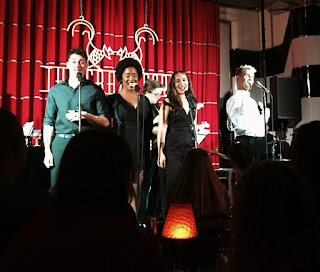 ★★★★★ Luke Bayer in Concert at the Crazy Coqs


‘One to watch’ is a well-used, even hackneyed, expression when talking of an up-coming performer. But, without a shadow of a doubt, Luke Bayer is that person. Making his sold-out solo concert debut at London’s Crazy Coqs at Brasserie Zedel, he had a captivated audience of over 80 people – his mother included - enthralled as he took us through his eventful career from an aspiring, tearful fourteen-year-old on The X Factor to now.

So it was no surprise that Luke started his set with Don’t Even Know It from Everybody’s Talking About Jamie, where he is currently the alternate Jamie New and seemingly has a large and loyal following – just look at his social media.


His story about his journey on X Factor was amusing and insightful, especially the stories about the array of audition pieces that he prepared on the way to eventually getting in front of Danni Minogue at judge’s houses where he ultimately sang Mandy before losing out. I particularly liked the indiscreet story about Miss Minogue which can’t be repeated here for legal reasons!


Luke’s concert was as much about his friends who supported him with great grace throughout, all of whom deserve immense praise - Jodie Sam Steele currently in Heathers, Danielle Steels presently in Bat Out of Hell, and Toby Marlow, writer of West End smash Six.  His duet, Only Us from Dear Evan Hansen, with Jodie was beautifully heart-warming, and the new song, I’ll See You Again by Toby, exceptional.


Dear Evan Hansen seemed to permeate the evening with other songs, For Forever and You Will Be Found, from the Broadway show, soon to be seen in London. As was explained to me by an older fan as I left, ‘there’s a movement to get Luke the part’ – well, I am a great believer if you don’t ask, you don’t get!


The concert also included a very amusing medley, Parts I’ll Never Play, put together by excellent MD Joe Beighton, together with an excerpt from Prom Queen, a new musical which I saw in a workshop performance earlier this year. As with the workshop, Luke duetted with the very gifted Cameron Burt, who formed part of his backing vocalists with Martha Kirby and Danielle Fiamanya, all incredibly talented students of Guildford School of Acting.


That having been said, the night belonged, quite rightly, to Luke Bayer, who sang, joked, moved, chatted with consummate ease and style, and his determination, ambition and undoubted talent must be unequivocally admired and encouraged. He is an enormous asset to the West End and undoubtedly has that indefinable X factor!

There are many clips available on Instagram and YouTube from the concert especially on Sparkles' channel see below for a few...