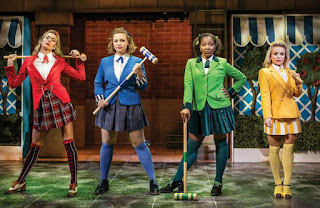 
There seems to be a new-found excitement in the West End with audiences wholly enervated and determined to have the best time throughout. Seemingly the show is well-known in advance, and the audience is just bursting to applaud and cheer, guaranteeing an electric atmosphere from the outset and throughout. Six and Eugenius fall into this new-cult category, and Heathers is the latest show to be enjoying this social media-driven phenomenon.


We arrive at ‘Westerberg High, where Veronica Sawyer is just another of the nobodies dreaming of a better day. But when she’s unexpectedly taken under the wings of the three beautiful and impossibly cruel Heathers, her dreams of popularity finally start to come true. Until JD turns up, the mysterious teen rebel who teaches her that it might kill to be a nobody, but it’s murder being a somebody...’


Based on the 1989 cult film, Heathers: The Musical is a rock musical with music, lyrics, and a book by Laurence O'Keefe, who created Legally Blonde the Musical, and Kevin Murphy and is much darker than your average musical, covering issues like bullying, teen suicide, violence in schools, and even murder. Heathers is nevertheless, vibrant, witty, amusing and extremely camp with great songs and some knock-out one-liners!


Carrie Hope Fletcher as Veronica Sawyer gives a stunningly brilliant performance. Not only is she a social media star with over 650,000 subscribers to her YouTube channel but also a massive talent on the West End stage. Her singing voice is absolutely outstanding and, to use an old-fashioned expression, she owns the stage. Her fellow Heathers, T’shan Williams, Sophie Isaacs and notably Jodie Steele are outrageously evil, but all give wonderfully compelling performances.


Jamie Muscato as the very dark Jason Dean is decidedly menacing but also gives a plausible interpretation to this troubled character. On a lighter note, Christopher Chung and Dominic Andersen as Kurt and Ram, the jock interest in the show, are both hilarious and engagingly stupid in their roles. Decidedly one of the funniest moments was the song My Dead Gay Son, where their fathers sing about their dead, and allegedly gay sons at their funeral – a complete camp tour de force performance from Nathan Amzi and Jon Boydon.


While Heathers undoubtedly deals with dark themes, I would defy anybody not to leave the theatre with at least a grin on their face. It is without a doubt a truly infectiously good fun night with an ensemble who deserve the uproarious reception that they get from the get-go!
Book tickets HERE
Carrie Hope Fletcher Christopher Chung Dominic Andersen Heathers - The Musical Jodie Steele Jon Boydon Nathan Amzi Review Chap Sophie Isaacs T’shan Williams