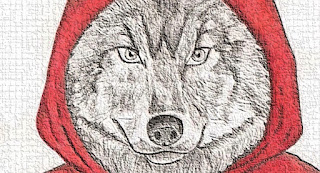 Wolf is a new play by Liam Lemkin Anderson and is firmly set in the #MeToo era, although seemingly without paying much heed to the lessons that should have been learnt. Described as ‘a twisted fairytale’, Wolf was at times uncomfortable to watch as there was a genuine feeling of foreboding and unease as to the ultimate denouement of the piece.


The production synopsis neatly describes the set up as ‘Professor Hunt invites Alice to his country house (albeit at the end of the Central line) for an evening of academic and creative guidance. As the drinks go down, Hunt reveals that he was expecting slightly more than dinner and wine. But Alice has a secret - one that threatens to destroy Hunt's life and career forever.’ As with all fairytales, all is not what it seems as both characters have an agenda - Professor Hunt’s as bright as day and sadly as old as the hills in his lupine intentions, but Alice is ultimately an evil, manipulative witch. And decidedly not all she would seem. Who is to blame in this slightly tortuous setup? The answer, in my opinion, is that Hunt and Alice are indeed as bad as each other.


"You can't be too careful, not round here. And like I say, we really shouldn't be doing this."


Lemkin Anderson’s structure neatly uses some flashback to explain the set up as effectively the first scene leaves the audience with a worrying enigma as both characters are passed out in some sort of drug-induced state, and with undoubtedly many unanswered questions. It is not until the third scene that there is resolution/explanation.


Mark Shaer’s portrayal of Professor Hunt is assured, relaxed and credible and it is only when he ends up naked that his character becomes slightly unbelievable and lacks real credibility. Martha Schofield as Alice is apparently a young woman on a mission. Not least from a student/professor standpoint, but as a character on a mission, with a secret and a dogged determination for a resolution of her nagging anxieties. Both actors handle the setup with confidence, style and integrity.


My concern with Wolf is that it becomes slightly laboured and doesn’t invest in the audiences ability to grasp what is in truth a well-trodden plot and it would have been more challenging to explore the relevance of the twists in the plot and those aspects that the audience may not have experienced. Less would have definitely been more and also added to the pace.


With little biographical background available – a cast list, however brief would be beneficial, I am assuming this is one of Lemkin Anderson’s early works. Wolf as a piece of writing does have great potential, especially as multiple contemporary themes would benefit from further exploration and expansion.


While we would traditionally boo the big bad wolf, I am not sure that this little red riding hood is entirely the innocent that she would like us to believe?
Wolf played at the Cockpit theatre on 31 July 2018 as part of Camden Fringe