The Jungle - A feast of sheer brilliance 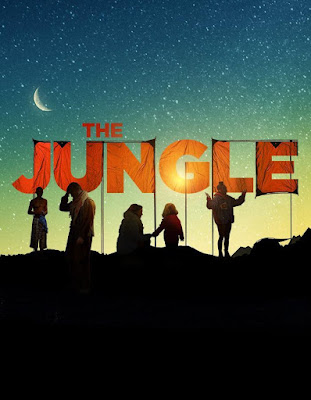 
As you pass through the French Renaissance-inspired elevation of the Playhouse Theatre and the marble-clad, mirrored foyer, you are suddenly in the Afghan café – a makeshift structure with benches and tables, national flags, ethnic fabrics and fairy lights that adorn the plywood walls, with the smell of freshly baked naan bread in the air and the sound of jets flying overhead. Underfoot there is dirt, bark and mud and it’s not long too before you are served hot sweet chai tea, with a bottle of Heinz tomato ketchup perched in front of you. This is the brilliance of Miriam Buether’s set design – no quick dunk that passes as immersive theatre but what must now be the gold standard.


We are now in the middle of The Jungle, a camp that was in Calais and at its height was home to over 8,000 refugees from around the world.  Written by Joe Murphy and Joe Robertson and based on interviews, The Jungle shares stories of loss, hope and fear from the resilient residents of Europe’s largest refugee camp, and their ultimate desire to escape to the UK and the risks that they are prepared to take to achieve this dream. It is also about the strength and commitment of this diverse community in the most terrible situations, conditions and the constant threat of eviction by the French authorities.


The success of The Jungle is ultimately due to the brilliance, dexterity, skill and passion of the most spectacular 24-strong ensemble. There were standout performances from Ammar Haj Ahmad as Safi who effectively acts as the narrator, Mohammad Amiri as Norullah whose boundless vigour and total dedication is quite beautiful and mesmerising to watch, and John Pfumojena as Okot, whose performance is emotionally-charged, moving and shrewdly credible.


I must also mention Alex Lawther as 18-year-old Sam, the unbearable Eton-educated, posh boy millennial, who managed to bring a tear to my eye, such was the strength and emotion of his passion, dedication and determination in trying to bring some order to the camp, and ultimately save it from wilful destruction.


Stunning directed by Stephen Daldry and Justin Martin, The Jungle is one of those theatrical experiences that come along too infrequently. A politically-charged masterpiece that ultimately must be above politics and should be seen at all costs as it is not often you get to encounter sheer brilliance!
Alex Lawther Ammar Haj Ahmad Joe Murphy Joe Robertson John Pfumojena Justin Martin Mohammad Amiri Playhouse Theatre Review Review Chap Stephen Daldry The Jungle