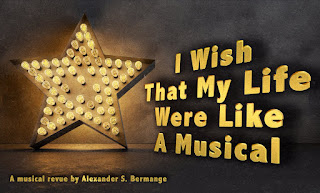 
Wit, style, intelligent comedy and knock-out performances are all in joyous abundance in Alexander Bermange’s brilliantly chic revue, I Wish My Life Were Like A Musical currently playing at The Crazy Coqs, an intimate Art Deco-inspired cabaret venue within Corbyn and King’s Brasserie Zedel in the heart of London’s West End.


I Wish My Life Were Like A Musical, returns for a two week run after tremendous success earlier this year. The revue presents ‘everything you could possibly want to know about being a musical theatre performer… if only any would dare to admit it’. Shamelessly there are several, myself included, who would love to learn the secrets and last night’s show was a complete masterclass! Everything from opening numbers, auditions, dancing, guest spots, life as a cover, to ultimately being a diva and not being able to end a show without an encore. All these anecdotal songs are beautifully drawn from clear first-hand experiences in the beautiful business known as show! I am only surprised that Mr Bermange has not turned his musical incisiveness on to critics – hopefully coming soon!


Bermange’s music and lyrics have many cuttingly knowledgeable references to the great musicals – Les Mis, Chicago, and Wicked to name just a few – which add tremendous fun to the particular parts of the show, especially if you are in the know as to provenance. I particularly enjoyed the comic references to Wicked, as it is a one-song show that I’m not particularly fond - heresy to admit but hey ho!


I Wish My Life Were Like A Musical, deftly directed by Derek Bond, has a stellar cast. Madalena Alberto (Evita, Piaf, Les Miserables), Suzie Mathers (Wicked, Company, Mamma Mia), Cedric Neal (Motown The Musical, King, Porgy and Bess) and Lucas Rush (American Idiot, Thoroughly Modern Millie and soon Rock of Ages), who have been there, experienced the various topics of the show and, in Lucas Rush’s case, clearly got the T-shirt! I would add that Alexander Bermange (Composer/Lyricist, Musical Director/Pianist) is on-stage throughout keeping a beady eye on proceedings, adding pertinent quips and ensuring his score is always on point.


This joyous, super-talented ensemble all sing and dance with consummate skill and dexterity but also have a wonderful sense of comedy and timing, the ultimate prerequisite to exploit the depth, nuance and wit of the songs, smart lyrics and situations.


I Wish My Life Were Like A Musical is a very welcome addition to the West End landscape, and Fane Productions should be applauded for their vision in giving musical enthusiasts and aficionados alike such an enjoyable experience and breathing life into the concept of the intimate revue.


Let’s hope that I Wish My Life Were Like A Musical and future incarnations have found a permanent home at The Crazy Coqs as I feel sure that there is a voracious appetite for a revue that gives so much pleasure with its uncompromising wit, intelligent comedy and heavenly performances – clearly I enjoyed it!