Around the World in 80 Days - A magical mystical musical 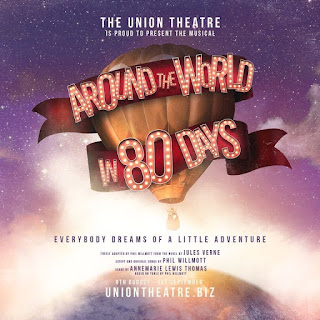 
Once again producer Sasha Regan’s has seemingly pulled off the impossible. Who would think that elephants and hot air balloons would fit so snugly into the lovely space that is the Union Theatre? But don’t doubt it as Phil Willmott’s smart, witty musical adaptation of Jules Verne’s Around the World in 80 Days lands with enormous elephantine gusto and helium-filled style.


We ‘follow Phileas Fogg and his adorable madcap valet, Passepartout, as they race against time to circumnavigate the world in just 80 days. With his entire fortune at stake, Phileas risks life and limb to win his bet against his arch nemesis, Captain Fix, who will stop at nothing to thwart Fogg in his adventures. Will Phileas make it before the time runs out?’ Rest assured, there are no spoilers here!


The big-hearted seventeen-strong Fogg ensemble is led by Sam Peggs as Phileas who plays the jolly English eccentric with tremendous verve and credible affection. He is ably assisted by Connor Hughes as his trusted sidekick Passepartout, who not only sings and dances with panache but also has a brilliant sense of comedy whatever scrape he is involved in. Robert Oliver as the dastardly Captain Fix gives a beautiful bravura performance and is irresistible in his camp evilness.


Phil Willmott’s script has been ‘freely adapted’ from Jules Verne but seemingly with a vast amount of love and affection. It also has tremendous pace and an original musically-diverse score. Henry Brennan, the musical director, is comfortably ensconced in the midst of the mayhem and gets the most out of the score which is crying out for a fuller orchestra but all good things come to he/she who waits!


Brendan Matthews, director and Mitchell Harper, choreographer, have created a fun-filled diversion that is uplifting and joyous whose strength lies in the complete cohesion and undoubted dedication of the excellent ensemble that sings, dances and, without doubt, enjoys the wit and comedy embedded in the beautifully eccentric and crazy world of Phileas Fogg.


And finally, just for the record, it would be impolite not to mention Eugene, the gorgeous, magical elephant currently appearing at the Union Theatre – definitely worth the price of the ticket alone and, may I say, so well behaved!