As a fan of Baz Luhrmann’s 1992 iconic and award-winning film, STRICTLY BALLROOM, it was with great anticipation that I approached London’s Piccadilly Theatre. My fellow theatre obsessive had even texted to warn she was running late but was currently, ‘cha-cha-chaing down Oxford Street with all haste’  - apparently in a good mood and looking forward to a glamorous night in the ballroom. 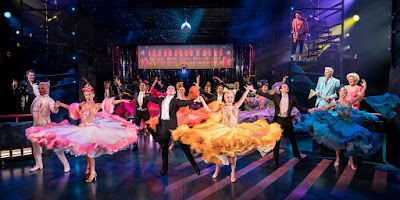 Strictly Ballroom has been transformed into a West End musical by director/choreographer Drew McOnie and tells the well-known story of, ‘Scott Hastings, an arrogant young ballroom champion who gets in trouble for daring to dance his own steps, and ends up dancing with a beginner, Fran – but together they find the courage to defy tradition with moves that aren’t “strictly ballroom”…’
As a spectacular visual experience, Strictly Ballroom packs more than enough ostrich-feathered, sequin-encrusted sparkle and glam to satisfy the Swarovski glitz-o-meter by a country mile! The show is cleverly held together by the super-talented Will Young in the newly-created role of Wally Strand, a master of ceremonies who oversees and comments on the action, and sings all the songs! No mean feat as the show features over 30 classic hits including Time After Time, Let’s Dance, I’m So Excited, Perhaps Perhaps Perhaps, I Wanna Dance With Somebody, Sway (Quien Sera), Mambo No. 5, Dancing With Myself, Sugar Sugar, It’s the End of the World as We Know It, Teardrops, and Love is in the Air. All I must say with great aplomb and serious purpose.


The cast is led by Jonny Labey as Scott Hastings and Zizi Strallen as Fran, both giving convincing performances and some sharp, sexy dances moves, although I did find Fran’s transition from shy, bespectacled and awkward to assured, sultry, high-kicking dancer, slightly incredible, but then again, with a Strallen on stage you are assured of dance brilliance!
Other stand-out performances from Ivan De Freitas as the iconic Merv, Anna Francolini as the pushy Shirley Hasting and Stephen Matthews as the hen-pecked Doug Hasting ensure that the well-loved storyline remains perfectly safe. Above all the ensemble cha-cha, tango, pasodoble with complete gusto and style, filling the Strictly ballroom with a visual dance extravaganza. 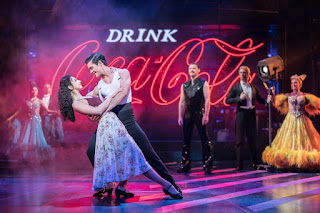 Without a doubt, Strictly Ballroom is a spectacular theatrical experience and guaranteed to have you dancing, singing and, above all, smiling as you leave the theatre.

Click here to see my review of Will Young in Cabaret