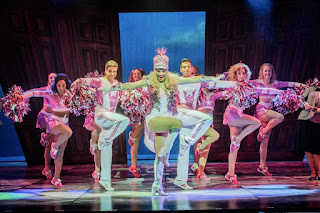 ★★★★★ Legally Blonde
I must admit I had never seen the film of Legally Blonde and also missed Sheridan Smith when she starred in the West End production at the Savoy Theatre in 2010. So, why now, you might ask? Who knows, but it was a journey to Wimbledon that I didn’t regret. My only sadness was that the audience was woefully thin on the ground, but that can be a good as the cast usually work harder. Albeit small the audience was beautifully formed and were living the show from the moment it started. Sadly too, Lucie Jones, the name on the poster, was off but her understudy, Rebecca Stenhouse, did a sparkling job. 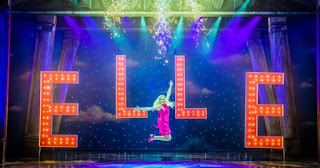 Just for the record, as the majority of the audience seemingly knew the story, Legally Blonde is ‘based on the novel by Amanda Brown and the 2001 film. It tells the story of Elle Woods, a sorority girl who enrols at Harvard Law School to win back her ex-boyfriend Warner. She discovers how her knowledge of the law can help others, and successfully defends exercise queen Brooke Wyndham in a murder trial. Throughout the show, no one has faith in Elle Woods, but she manages to surprise them when she defies expectations while staying true to herself.’

This production of Legally Blonde has been on the road since September 2017 and ends next week in Manchester, but that didn’t dull the performances of a powerful ensemble that was utterly captivating and worked their proclivity for pink to the max. Rita Simons is a total standout revelation as Paulette Bonafonte – hysterically funny, great voice and to use an old-fashioned expression, totally owns the stage. It’s worth the price of the ticket just to see her!


That having been said, this is a brilliantly talented ensemble. Rebecca Stenhouse as Elle was funny, witty, assured and sang and danced like a star, and suited pink beautifully! David Barrett was perfect as Emmett Forrest who seemingly has an established fan base as the whoops and screams for him were heartfelt and also seriously well-deserved!

With music and lyrics by Laurence O'Keefe and Nell Benjamin and book by Heather Hach, the whole production is cleverly and wittily directed and choreographed by Anthony Williams. The musical numbers are hilarious and smart, especially Whipped Into Shape, a choreographic tour de force, featuring synchronised skipping, led by Helen Petrovna as Brooke, Bend and Snap, and There! Right, There! (Gay or European?), which was hysterically funny and a real laugh out loud moment of pure musical comedy joy! Bravo Felipe Bejarano and Connor Collins.


So, even if pink isn’t your colour and you are distrustful of the legal system, this is a case you mustn’t miss – even with only a couple more performance in Wimbledon but, thankfully, a whole week in Manchester.
P.S. DOG ALERT! Also features a couple of very cute dogs!