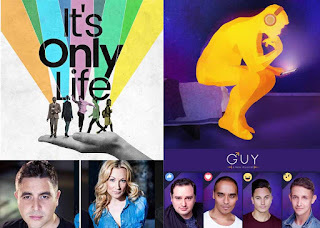 
Next week sees the opening of two musical in London; It’s Only Life and Guy, both with successful reality stars in their small ensembles.
Noel Sullivan, who first rose to fame in 2001 after his appearance as an aspiring pop singer in the reality television documentary Popstars and was a founder member of the pop group Hear'say opens in Katy Lipson’s It’s Only Life at the Union Theatre.  Seann Miley Moore, an X-Factor finalist in 2015, opens in Leoe&Hyde’s Guy at the Bunker Theatre - both from 13 June.
Unashamedly quoting from both shows’ blurbs:
'GUY is the love letter of a generation. It tells the story of a gay, fat, socially- awkward millennial who's looking for love - on an app which has a million unspoken prejudices based on appearance. A realistic look at the (hook)ups and downs of dating apps, GUY is a reminder that modern dating is a lot more than models having 24-hour sex.

'With unforgettable songs about being rejected on dating apps, clicking with another person, dealing with an eating disorder, and trying to get that beefed-up body, the music is unashamedly contemporary: think Sam Smith meets Stranger Things..’

‘It's Only Life is a musical revue featuring the songs of John Bucchino. His songs have been recorded and performed by Judy Collins, Patti LuPone, Yo-Yo Ma, Audra MacDonald, Liza Minnelli, Art Garfunkel and many others.
‘Conceived by director Daisy Prince and the award-winning songwriter, It's Only Life is about longing, fulfilment, loss, triumph and ultimately wisdom.’

So, it would seem that life, love and relationships are the hot topics for next week’s musical openings, together with the strong Manchester connection shared by both productions.
﻿

GUY : The Musical
Music by Stephen Hyde
Lyrics & Book by Leoe Mercer
as part of BREAKING OUT at The Bunker Theatre