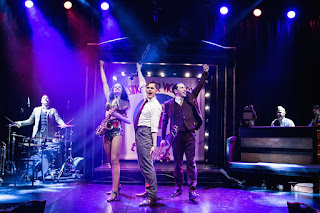 Arriving at the Hippodrome Casino, I was amazed at the size and grandeur of the casino which you walked through to get to the more intimate cabaret theatre. It is a very interesting reimagining of Frank Matcham’s former Hippodrome circus variety theatre which was also home to the Talk of the Town in the 1950s and more recently Peter Stringfellow’s Hippodrome discotheque – the closest London came to having its version of Studio 54.


The cabaret theatre is a cosy 180-seat theatre on the first floor and is now rebranded as the Cockpit Club, the perfect venue for Matthew Bugg’s Miss Nightingale’s arrival in the West End. Seating is at tables and chairs and Las Vegas-style intimate booths with very attentive waiter service. Regrettably, it was very cold though as the air-conditioning was super efficient, but this was rectified easily in the second half.


The six-person Nightingale ensemble is led by writer, composer, producer, director and performer, Matthew Bugg playing Harry. It is the story of Maggie Brown (Laura Chinery), an aspiring singer and her best friend George Nowodny (Mathew Floyd Jones), a songwriter and Jewish refugee, who perform a dazzling act at the newest nightclub in town, owned by wealthy socialite and RAF war-hero, Sir Frank Worthington-Blythe (Oliver Mawdsley). Maggie’s beau Tom Connor (Adam Langstaff) paves the way for the sexy and charismatic ‘Miss Nightingale’ to be born, and the musical duo quickly find themselves with a West-End hit! However, what the leading lady doesn’t know, is that George and Sir Frank are hiding a secret and, as Miss Nightingale’s success grows, so does a forbidden love between the two men! 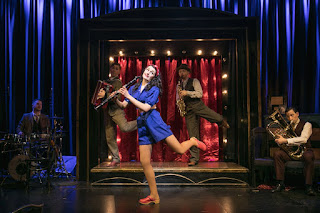 Must also give a special mention to the sixth member of the Nightingale family, Tobias Oliver playing Clifford who seems to be very adept at keeping the whole piece on course, while in addition playing the double bass - he is also the producer and marketing guru behind the show!
Matthew Bugg has clearly reworked aspects of the show from last year’s incarnation at the Vaults, and this is all to the good - I did notice a lot more sequins than last year! Laura Chinery plays Miss Nightingale with lots of verve and drive especially during her saucy innuendo-laden cabaret numbers when she gives us a world tour of sausages and the problems she has with her pussy. Silly, maybe? But perfect in the context of the show!
Mathew Floyd Jones and Oliver Mawdsley handle with sensitivity their clandestine relationship at a time when their love was clearly forbidden and, above all, illegal. 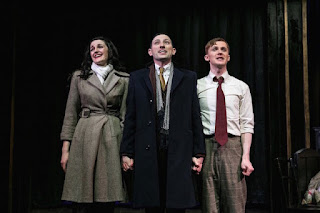 Miss Nightingale is, above all, a triumph for the multi-talented ensemble. Not only do they act, sing and dance, but also play all the instruments numbering over 27 used in the show. They handle with style, the delicacy of aspects of the storyline beautifully and also enjoy the raucous razzamatazz of the pure showbiz numbers. I particularly enjoyed ‘Stand Up and Be Counted’ which even involved tap dancing and shameless jazz hands too!
Allegedly, after six years of touring, this is the last time Miss Nightingale will be seen as Matthew Bugg feels it is time to move onto new projects. If, however, there is another incarnation, and as much as the actors are brilliant musicians, I would love to see some of the wonderful songs given a more orchestral treatment.


Miss Nightingale will be at its new West End home only until 6 May, and is highly recommended as a unique, innovative, glitzy, glamorous, thought-provoking production and a unique and welcome arrival to the West End! Dare I add, come back soon but, in the meantime, don’t miss Miss Nightingale now.