All or Nothing - The Mod Musical

All or Nothing – The Mod Musical 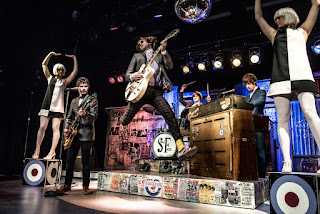 Arriving at the Ambassadors Theatre, I was expecting to witness a sea of Lambrettas and Vespas as seemingly happened when All or Nothing was touring the regional theatres, but was sadly disappointed - probably miserable London parking restrictions! 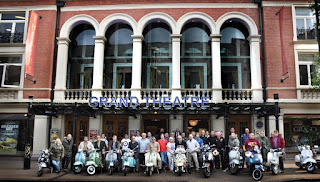 But there was an expectant buzz as the audience arrived, some even dressed in 60s’ Mod fashion and supporting wonderful matching hairstyles. This was clearly an audience out for a good night and All or Nothing did not disappoint.


I must admit that I was being taken to the show by one of the army of serious aficionados who have loved this show from the beginning and have been loyal followers around the country and have now been rewarded with two West End runs.
﻿

The musical has been written, directed and produced by Carol Harrison, who also stars as Kay Marriott and is the story of the Small Faces and features their iconic music. Ms Harrison declares in her programme notes, ‘once a Mod, always a Mod!’ and whilst this was definitely true of a majority of the audience, it is not a prerequisite and in no way spoilt my enjoyment.

The story is brilliantly narrated by Chris Simmonds as the older Steve Marriott, who gives a relaxed, assured and compelling performance as he guides us through the naissance and history of the Small Faces. I cannot understate how much I enjoyed his exposition of the ups and downs of the pop music business in the 60s – it was fascinating and maintained my curiosity and interest throughout.


Above all, this is a show about the music and the superb band fronted by Samuel Pope as young Steve Marriott, with Stefan Edwards as Kenney Jones, Stanton Wright as Ronnie Lane and Alexander Gold as Ian Mclagan. All extremely talented actor/musicians who didn’t disillusion in their renditions of the classic hits like All or Nothing, Lazy Sunday, Itchycoo Park and the rest of the Small Faces’ extensive songbook – a songbook that defined a generation. 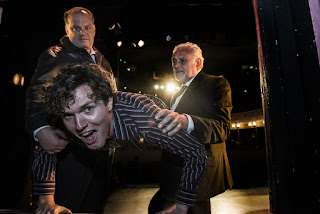 Russell Floyd as the legendary pop Svengali and altogether nasty piece of work, Don Arden, played the crook well and was totally believable as someone who would hang you out of a window on the sixth floor to get his way! Carol Harrison’s portrayal of Mrs Marriott was a tour de force of camp determination and strength but the success of All or Nothing depends on the complete ensemble who work seamlessly to guarantee a night of pure pop nostalgia and, I quote ‘banging, brilliant, nostalgic fun!’


All or Nothing is playing at the Ambassadors Theatre West Street London WC2H 9ND until May 2018.
Performance times are Monday to Saturday at 7.30pm with matinees Thursday & Saturday at 3.00pm.
The show runs for approximately 2 hours 40 minutes with an interval.