‘Scream Babooshka and consider a creeping truth: we are such stuff as nightmares are made on.’


Once again the talented team at Golem! Theatre is at their creative best with David Fairs’ new play Tomorrow Creeps, premiering as part of the Vaults Festival from 24 January 2018.

Following the successes of Macbeths (2016) and I Know You Of Old (2017), GOLEM! return to push the boundaries of adaptation yet further with Tomorrow Creeps, a new play orchestrated from sixteen Shakespeare texts and inspired by the storytelling of Kate Bush. 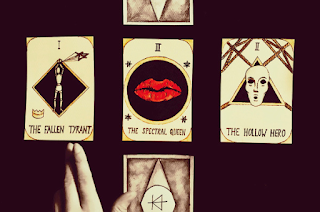 Directed by Anna Marsland (Ballistic at Edinburgh Festival and soon at The King’s Head, Islington) and featuring David Fairs, Conor O’Kane (Offie-nominated for Miss Nightingale) and Zena Carswell (winner of The Origins Award for Outstanding New Work at VAULT festival 2016 for Butter with Lady Junk Theatre), Tomorrow Creeps has been created with the Vaults in mind and promises to be an immersive piece of new theatre. Multi-instrumentalist musician and composer, Odinn Hilmarsson has also designed and created a soundscape to complete the piece.
As someone lucky enough to have experienced Golem’s I Know You of Old at the Hope Theatre (and no aficionado of Shakespeare), it was one of the best pieces of new writing that I saw (twice) last year, together with great performances from this innovative and talented company. So, retrospectively, here’s my belated five stars!
So roll on Tomorrow Creeps, Babooshka! Let the nightmare begin!


TOMORROW CREEPS
a new play by DAVID FAIRS
drawn from the works of William Shakespeare,
and inspired by Kate Bush
At VAULT Festival 2018, The Vaults, Leake Street, London SE1 7NN 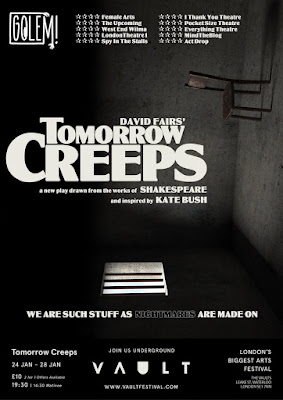 
‘GOLEM! sticks up two fingers at Shakespeare purists who, with quivering voices, clutch their pearls and gasp, “But the text!”…Fairs’ work is an important contribution to Shakespeare practice…To create an entirely new play using only Shakespeare’s text demonstrates the timelessness and robustness of the language, characters and themes. This is Shakespeare fan fic executed with care, skill and panache. More, please!’
- Laura Kressly, The Play’s The Thing

'Condensing and repurposing Shakespeare’s original text, writer David Fairs discovers a much blacker comedy at the heart of Much Ado About Nothing.'


'I Know You Of Old is an astonishing achievement.'
- Liz Dyer for TheatreThings


'Ones to watch'
- Paul Joyce, I Thank You Theatre


'I Know You of Old is a clever, intelligently crafted play which proves highly successful thanks to tight and skilled direction, matched by enjoyable performances from an exceptionally capable cast.'
- Peter Brown, ActDrop


'Marsland is a thorough visionary, constructing her world with nuance and finesse and ensuring the little things don’t crack the façade that she painstakingly puts together.'
- Daniel Perks, Culture by Night


‘Macbeths is an impressive achievement… feeling like a completely new, contemporary story… With riveting performances and a narrative that continually wrong-foots its audience, David Fairs has created a gripping thriller that will appeal just as much to those who claim not to like Shakespeare as it does to die-hard fans.’
- Liz Dyer for London Theatre 1